from slug to plug

Well this took rather longer than expected. I intended to write about my latest toy much earlier than this, but several things got in the way – more of which later.

About three or four weeks ago I bought myself a new sheevaplug. 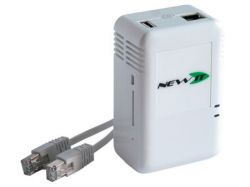 The plug has been on sale in the US for some time, but UK shipping costs added significantly to $99 US retail price. Recently however, a UK supplier (Newit) has started stocking and selling the plugs over here – and at very good prices too. My plug arrived within three days of order and I can thoroughly recommend Newit. The owner, one Jason King no less (fans of 1970’s TV will recognise the name), kept me informed of progress from the time I placed the order to the time it was shipped. He even took the trouble to email me after shipping to check that I had received it OK. Nice touch, even if it was automated.

Looking much like a standard “wall wart” power supply typically attached to an external disk, the plug is actually quite chunky, but it will still fit comfortably in the palm of your hand. Inside that little box though there is enough computing power to make a slug owner more than happy. The processor is a 1.2 GHz Marvell Kirkwood ARM-compatible device and it is coupled with 512MB SDRAM and 512MB Flash memory. Compare that to the poor old slug’s 266 MHz processor and 32 MB of flash and you can see why I’d be interested – particularly since the plug can run debian (and Martin Michlmayr has again provided a tarball and instructions to help you out.

The plugs come in a variety of flavours, but all offer at least one USB 2.0 port, a mini usb serial port, gigabit ethernet and an SDHC slot. This means that debian (or another debian based OS such as Ubuntu) can be installed either to the internal flash or to one of the external storage media available. Newit ship the plugs in various configurations and will happily sell you a device fully prepared with debian (either Lenny or Squeeze according to your taste) on SD card to go with the standard Ubuntu 9.04 in flash. Personally I chose to install debian myself, so I bought the base model. (No, I’m not a cheapskate, I just prefer to play. Where’s the fun in buying stuff that “just works”?)

Given that Martin’s instructions suggest that installing to USB disk can be problematic, and that I have debian lenny on my slugs (and had a spare 4 Gig SDHC card lying around) I chose to use his tarball to install lenny to my SDHC card. Firstly I formatted the card (via a a USB mounted card reader) as below:

(note that the plug will see these devices as “/dev/mmcblk0pX” when the card is loaded. The “/dev/sdbX” layout simply reflects the fact that I was using a USB mounted card reader on my PC. )

I then downloaded and installed Martin’s lenny tarball to the newly formatted card and as instructed edited the /etc/fstab to match my installation. Martin’s fstab file is below:

As you can see it defaults to assuming a USB attached device. You need to comment out the USB boot entries and uncomment the SD/MMC entries if. like me, you are intending to boot from SD card. At this stage I also edited “/etc/network/interfaces” to change the eth0 interface from dhcp to static (to suit my network) and I changed “/etc/resolv.conf” because the default includes references to cyrius.com and a local IP address for DNS.

Before we can boot from the SD card, we have to make a few changes to the uboot boot loader configuration to stop it using the default OS on internal flash (where the factory installed Ubuntu resides). Again, Martin’s instructions are helpful here but he points to the openplug.org wiki for instructions in setting up the necessary serial connection to the plug. On my PC (running Ubuntu 8.04 LTS) I got no ttyUSB devices by default and “modprobe usbserial” did not work but “modprobe ftdi_sio vendor=0x9e88 product=0x9e8f” did work for me.

Now open a TTY session using cu thusly “cu -s 115200 -l /dev/ttyUSB1” – don’t use putty on linux, it doesn’t allow cut and paste which can be very useful if you are following on-line instructions (of course it helps if you cut and paste the right instructions). I found that booting is too fast if you have to switch on the plug and then return to a keyboard so I recommend simply leaving the terminal session open and resetting the plug with a pin or paper clip. Hit any key to interrupt the boot session, then follow Martin’s instructions for editing the uboot environment.

My plug was running v 3.4.16 of uboot, so at first I used version 3.4.27 (downloaded from plugcomputer.org) and loaded that via tftp as described by Martin, But this turmed out to be a mistake because my plug failed to boot thereafter. I got the following error message via the serial console:

Some searching suggested that the uboot image was probably the problem and that reverting to v3.4.19 would solve this. So I downloaded 3.4.19 from “vioan’s” post “#6 on: November 16, 2009, 03:21:34 PM” at the plugcomputer.org forum and reflashed the plug with that image. Success – my plug now booted into debian lenny. Tidy up, update the OS and add a normal user as recommended and we’re ready to go.

My plug was intended to replace the slug I was using as my local apt-mirror. That mirror is now fairly large because I have a mix of 32 and 64 bit ubuntus (of varying vintages) and 386 and ARM versions of debian. I therefore recycled an unused 500 gig lacie USB disk and mounted that as /home2 (originally as /home, but I soon changed that when I wanted to unmount it frequently and then lost my home directory….) Copying the apt-mirror (175 Gig) over the network from my old slug was clearly going to take forever – high speed networking is not the slug’s forte, so I mounted both the slug and the plug’s disks locally on my PC and copied the files over USB – much faster. It was here that I discovered why the old lacie disk (a “designed by porsche” aluminium coated beast) was lying idle. I’d forgotten that it sounded like a harrier jump jet on take off when in use. I put up with that for a week – just long enough to get me to a free weekend when I could rebuild the old slug (now used as just an NTP server and the webcam) to boot from a 4 gig USB stick so that I could recycle its disk onto the plug. I’ve just finished doing that.

One other problem I found with the plug which caused me much head scratching (and delayed my writing this as I noted above) was that it consistently failed to boot back into my debian install after a “reboot” or “shutdown -r” – I had to power cycle the device to get it to boot properly. I spent some time this weekend with the serial port connected before I noticed (using “printenv” at the uboot prompt) that I had mixed up the uboot environment variables printed on Martin’s site. I had actually copied part of the instructions for the USB boot variant instead of the correct ones for the SD card boot. Sometimes “cut and paste” can be a mistake.