I last posted about ripping DVDs to PSP format back in November 2007. Since then I have used a variety of different mechanisms to transcode my DVDs to the MP4 format preferred by my PSP. A couple of years ago I experimented with both winff and a command line front end to ffmpeg called handbrake. Neither were really as successful as I would have liked (though winff has improved over the past few years) so I usually fell back to the mencoder script that works for 95% of all the DVDs I buy.

I have continually upgraded the firmware on my PSP since 2007 so that I am now running version 6.20 (the latest as at today’s date). Somewhere between version 3.72 and now, sony decided to stop being so bloody minded about the format of video they were prepared to allow to run on the PSP. We are still effectively limited to mpeg-4/h.264 video wth AAC audio in an mp4 container, but the range of encoding bitrates and video resolutions is no longer as strictly limited as it was back in late 2007. So when going about converting all the DVDs I received for christmas and my last birthday and considering whether I should I move my viewing habits to take advantage of the power of my N900, I recently revisited my transcoding options.

Despite the attractiveness of the N900’s media player I concluded that it still makes sense to use the PSP for several reasons:- it works; the battery lasts for around 7 hours between charges; I have a huge investment in videos encoded to run on it; and most importantly, not using the the N900 as intensively as I use the PSP means that I know that my ‘phone will be charged enough to use as a ‘phone should I need it.

But whilst revisiting my options I discovered that the latest version of handbrake (0.9.4) now has a rather nice GUI and it will rip and encode to formats usable by both the PSP and a variety of other hand-held devices (notably apple’s iphone and ipod thingies) quite quickly and efficiently. Unfortunately for me, the latest version is only available as a .deb for ubuntu 9.10 and I am still using 8.04 LTS (because it suits me). A quick search for alternative builds led me to the ppa site for handbrake which gives builds up to version 0.9.3 for my version of ubuntu. See below: 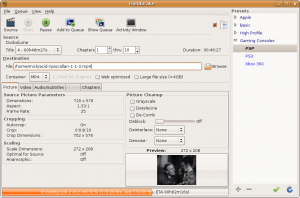 This version works so well on my system that I no longer have to use my mencoder script.