ubuntu is free and it always will be

But we may ask you for a contribution.

Canonical have made another move in what is beginning to look ever more like a monetary commercialisation of ubuntu. On 9 October 2012, they added a new page to the “download” section titled “Tell us what we should do more……and put your money where your mouth is ;)” The page looks like this: 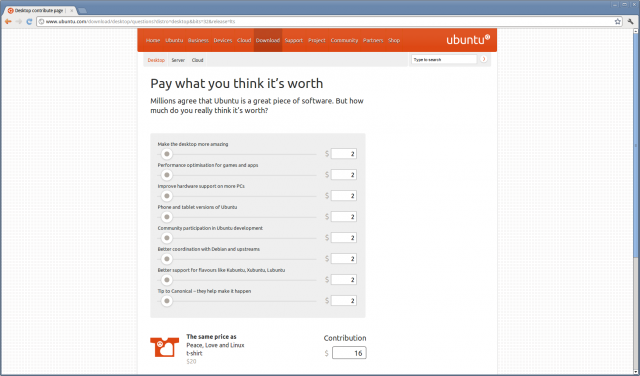 The sliders allow you to “target” your contribution to those areas of ubuntu which you feel deserve most reward (or conversely, you believe need most effort in improvement). The default is $2.00 for each of the eight radio button options (for a total of $16.00).

Now $16.00 is not a huge amount to pay for a linux distro of the maturity of ubuntu, but I’m not sure I like the way this is being done. Most distros offer a “donate” button somewhere on their website, but no other has placed it as prominently in the download process as canonical has chosen to do. I’m also a little bothered by the size and placement of the “Not now, take me to the download” option and I have a sneaking feeling that will become even less prominent over time.

Not surprisingly, some of the commentariat have taken great umbrage at this move (witness the comment over at El Reg of the form “Where is the option for “fix the known damn bugs and quit pissing around with GUI”?” and I expect more hostility as and when users start fetching the new 12.10 release.

But an earlier move to monetise the ubuntu desktop worries me even more. Canonical’s link with Amazon through the ubuntu desktop search was, according to Mark Shuttleworth, perfectly sensible, because “the Home Lens of the Dash should let you find *anything* anywhere. Over time, we’ll make the Dash smarter and smarter, so you can just ask for whatever you want, and it will Just Work.” (So that’s alright then.) But the problem, which Shuttleworth clearly doesn’t understand, is that people don’t generally like having advertising targetted at them based on their search criteria. (cf. Google…..). What was worse, the search criteria were passed to Amazon in clear. Think about that.

I share the views of Paul Venezia over at Infoworld where he says:

“But the biggest problem I have with the Amazon debacle is another comment by Shuttleworth: “Don’t trust us? Erm, we have root. You do trust us with your data already.” That level of hubris from the founder of Ubuntu, in the face of what is clearly a bad idea badly implemented, should leave everyone with a bad taste in their mouth. If this idea can make it to the next Ubuntu release, then what other bad ideas are floating around? What’s next? Why should we maintain that trust?

So fine, Mr. Shuttleworth. You have root. But not on my box. Not anymore.”

Ubuntu is already in decline following the way unity was foisted on the userbase. And Canonical has been likened to Apple in the past. Things can only get worse for ubuntu from hereon. Way past time to move on.

Permanent link to this article: https://baldric.net/2012/10/14/ubuntu-is-free-and-it-always-will-be/