more in the “you couldn’t make it up” dept

one unbound and you are free

back to the gym

Having just returned from a family holiday which included too much food and drink and nowhere near enough exercise (well, that’s what holidays are for) I needed to get back to the gym in order to work off some of the excess. My local gym has recently undergone a major refurbishment and equipment upgrade and some of the workstations (notably the treadmills) now have integrated touch screens providing access to a variety of services. As you can see from the picture below, these services range from the obviously relevant such as details of your workout, your heartrate or linkages to fitness trackers, through TV, Youtube or Netflix access, to the less obviously necessary social media services such as Facebook, Instagram and Twitter. God knows how you can tweet and run at the same time and it is beyond me why anyone would even consider giving their social media account details to a gym company. But hey, the technology is there and people do use it. 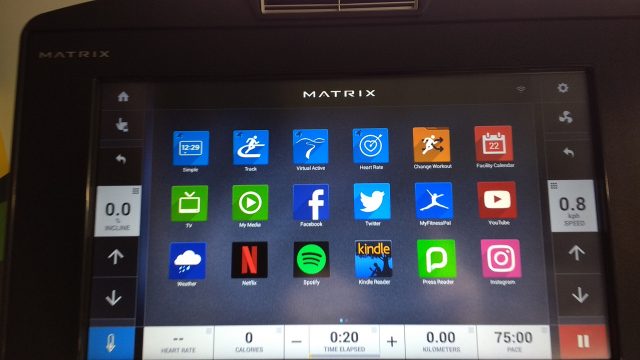 Before the refurbishment all we had was wall mounted TV screens in front of the treadmills and static bicycles so the ability to pick my own TV programme during a workout rather than having to watch yet another bloody episode of “Homes under the Hammer” or “This Morning” was welcome. What I confess was also attractive was the option to watch Netflix. I pondered for a while the wisdom of plugging in my Netflix account details to my workstation login, but eventually concluded that the ability to watch more of what I wanted than was available on TV at the times I use the gym was worth the (fairly low) risk of loss of my Netflix credentials. After all, breach of my Netflix credentials would not expose anywhere near as much about me as would be the case if I was daft enough to use Facebook, Instagram and Twitter and then give /those/ credentials to a third party.

My treadmill workouts usually take around 45-50 minutes before I move on to my other exercises. Not enough time for a film, but ample time for TV re-runs or box set episodes so I have been doing just that. On my reurn to the gym after the holiday I found myself watching early episodes of Black Mirror. Now there is something faintly surreal about watching Charlie Brooker and Konnie Huq’s “15 million Merits” (which is about people riding exercise bikes whilst watching interactive video screens in order to gain “social media” points) on a touch screen attached to a gym treadmill.

Especially when that system is made by a company called Matrix.