Well I finally cracked and ordered an N900 on-line just before Christmas. Nokia had been promising since about August of this year that the device “might” ship in the UK around October. Since then, the release date has slipped, and slipped, and slipped (much to the amusement of an iPhone using friend of mine who predicted exactly that back in August). Every time I read about a new impending release date I checked with the major independent retailers only to be told “no, not yet, maybe next month”.

Many review sites are now saying that Vodafone and T-Mobile will both be shipping the N900 on contract in January. Well, not according to the local retail outlets for those networks they won’t. And besides, I had no intention of locking myself in to a two year contract at around £35-£40 pcm, particularly if the network provider chose to mess about with the device in order to “customise” it. So, as I say, I cracked and ordered one on-line, unlocked and SIM free on 21 December. It arrived yesterday, which is pretty good considering the Christmas holiday period intervened. 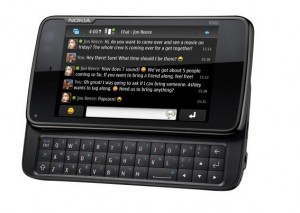 Well, there is a pretty good (if somewhat biased) technical description on the Nokia Maemo site itself, and that site also has a pretty good gallery of images of the beast so I recommend interested readers start there. There are also a number of (sometimes breathless) reviews scattered around the net, use your search engine of choice to find some. I won’t attempt to add much to that canon here. Suffice to say that I am a gadget freak and a fan of all things linux and open source. This device is a powerful, hand held ARM computer with telephony capability – and it runs a Debian derivative of linux. What more could you ask for?

Tap the screen to open the x-terminal and you drop in to a busybox shell. 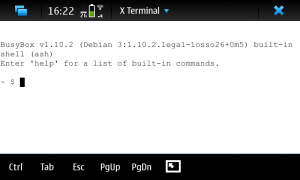 busybox shell on the N900

So – first things first. Add the “Maemo Extras” catalogue to the application manager menu, then Install openSSH, add a root password and also install “sudo gainroot”. Stuff you Apple, I’ve got a proper smartphone (and, moreover, one which is unlikely to be hit by an SSH bot because a) I have added my own root password, and b) I have moved the SSH daemon to a non-standard port – just because I can). Now I can connect to my N900 from my desktop, but more importantly from my N900 to my other systems. Next on the agenda is the addition of OpenVPN so that I can connect back to my home network from outside. Having the power and portability of the N900 means that even my netbook is looking redundant as a mobile remote access device.

[ update posted 16 March 2010 – This review at engadget.com is in my view well balanced and accurate. I have now had around three months usage from my N900 and I love its power and internet connectivity, but I have found myself carrying my old 6500 slide for use as a phone. I agree with engadget that the N900 is a work in progress. If I were designing a successor (N910?) personally I’d drop the keyboard (which I hardly ever use in practice) and save weight and thickness. ]