The lastest LTS version of ubuntu (10.04, or lucid lynx according to your naming preferences) was released to an eagerly waiting public on 29 April. Long term support (LTS) versions are supported for three years on the desktop and five years on the server instead of the usual 18 months for the normal releases. My current desktop of choice is 8.04 (the previous LTS version) and I will probably move to 10.04 eventually. But not yet.

A wet and windy bank holiday weekend (as this is) meant that my plans to go fishing were put on hold so I downloaded the 10.04 .isos to play with. I grabbed three versions, the 32 and 64 bit desktops and the netbook-remix version. Given that this was a mere day after the release date, I expected a slow response from the mirrors, but I was pleasantly surprised by the download speeds I obtained. Canonical must have put a lot of effort into getting a good range of fast mirrors. The longest download took just over 22 minutes and the fastest came down in just 14 minutes.

I copied the netbook-remix .iso to a USB stick using unetbootin on my 8.04 desktop (later versions of ubuntu ship with a usb startup disk creator) and installed to my AAO netbook with no hitches whatever. The new theme ditches the bright orange (or worse, brown) colour scheme used in earlier versions of ubuntu and looks attractive and professional. 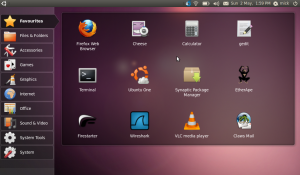 I spent a short while adding some of my preferred tools and applications and configuring the new installation to handle my multimedia requirements, but all this is now remarkably easy. Even playback of restricted formats (MP3 or AAC audio for example) is eased by the fact that totem (or rhythmbox) will fetch the required codecs for you when first you attempt to play a file which needs them. So, pleasant and easy to use. But I /still/ can’t get sony memory sticks to work.

But the netbook is simply a (mobile) toy. I do not rely upon it as I do my desktop. Any data on the netbook is ephemeral and (usually) a copy of the same data held elsewhere, either on a server in the case of email, or my main desktop. It would not matter if my installation had trashed the netbook, but my desktop is far more important. It has taken me a long time to get that environment working exactly the way I want it, and there is no way I will update it without a lot of testing first.

I am lucky enough to have a plenty of spare kit around to play with though and I normally test any distro I like the look of in a virtual machine on an old 3.4 GHz dual core pentium 4 I have. Until this weekend, that box was running a 64 bit installation of ubuntu 9.04 with virtualbox installed for testing purposes. Running a new distro in a virtual machine is normally good enough to give me a feel for whether I would be happy using that distro long term – but it does have some limitations and I really wanted to test 10.04 with full access to the underlying hardware so I decided to wipe the test box and install the 64 bit download. If it worked I could then re-install virtualbox and use the new base system as my test rig in future. If it failed, then all I have lost is some time on a wet weekend. It failed.

To be fair, the installation actually worked pretty well. My problems arose when I started testing my multimedia requirements. I installed all the necessary codecs and libraries (along with libdecss, mencoder, vlc, flash plugins etc, etc) to allow me to waste time watching youtube, MP4 videos and DVDs only to discover that neither of the DVD/CD devices in my test box were recognised. I could not mount any optical medium. This is a big problem for me because I encode my DVDs to MP4 format so that I can watch them on my PSP on the train. Thinking that there might be a problem with the automounter, I tried manually mounting the devices – no go, mount failed consistently because it could not find any media. I could not find any useful messages in any of the logs so I checked the ubuntu forums to see if others were having any similar problems. Yep – I’m not alone. This is a common problem. But it seems that I’m pretty lucky not to have seen a lot more problems (black, or purple, screen of death seems to be a major complaint). I think I’ll wait a month or so before trying again.

Meanwhile, I guess I can always ask for my money back.