PRISM – we had it first

I have been making some changes to my domestic network of late which I will write about later. However, one of the main changes has been an upgrade from 10/100 switches to gigabit – mainly to improve throughput between my central filestore and desktop machines. For cosmetic reasons (and to keep my wife happy) I try to avoid having cat 5 cables strung around the place and most of them are hidden behind bookcases, furniture or soft furnishings. Lengthier cabling between my study (which houses the routers) and other rooms is catered for either by wifi or by ethernet over powerline. Both of these, of course, run at much lower speeds than even my existing 10/100 cabling so they remained unchanged.

However, my main machines are all housed in the one room (my study) and it was here that I wanted to improve file transfer speeds. I was therefore more than a little disappointed (and puzzled) to find that replacing my old 10/100 Mbps Netgear 8 port switch with a TP-Link Gigabit switch made no difference whatsoever. At first I was inclined to blame myself for buying a TP-Link device when I had previously had a poor experience with their products, but realistically I could not believe that performance should be that bad. The best connection speed I saw in a straight file transfer over FTP between my new file server and my desktop was 9 MB/s. Now a gigabit switch has a theoretical throughput of 125 MB/sec – call it 95-100 MB/sec after allowing for overheads and transmission inefficiencies. But 9 MB/s? Hell that is way too low and looks more like the rate I would expect to see on a 100 Mbps connection.

After some head scratching I decided to pull out all the cabling between the two machines in question and the new switch. I found something I had forgotten was there – a CAT 5 RJ45 connector joining two separate lengths of cable into one. I had used that some long time ago when the cable run between my desktop and the old switch wasn’t long enough to stretch the full distance. By re-siting the switch (which because of my architectural changes no longer needed to be sited so far away) I could remove the junction and simply use two clean cable runs between the switch and the desktop and server. Bingo 89-92 MB/s throughput.

The offending object (below) has been consigned to the bin. But I confess to being puzzled as to why a single dumb connector should have had such an adverse impact over such a comparatively short cable run. 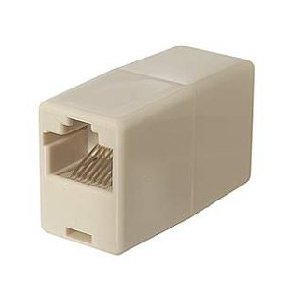 Permanent link to this article: https://baldric.net/2013/06/10/slow-gigabit-ethernet/