what is wrong with this sentence?

In my post of 8 May I said it was now time to encrypt much, much more of my everyday activity. One big, and obvious, hole in this policy decision was the fact that the public face of this blog itself has remained unencrypted since I first created it way back in 2006.

Back in September 2013 I mentioned that I had for some time protected all my own connections to trivia with an SSL connection. Given that my own access to trivia has always been encrypted, any of my readers could easily have used the same mechanism to connect (just by using the “https” prefix). However, my logs tell me that that very, very few connections other than my own come in over SSL. There are a couple of probable reasons for this, not least the fact that an unencrypted plain http connection is the obvious (default) way to connect. But another reason may be the fact that I use a self signed (and self generated) X509 certificate. I do this because, like Michael Orlitzky I see no reason why I should pay an extortionist organisation such as a CA good money to produce a certificate which says nothing about me or the trustworthiness of my blog when I can produce a perfectly good certificate of my own.

I particularly like Orlitzky’s description of CAs as “terrorists”. He says:

I oppose CA-signed certificates because it’s bad policy, in the long run, to negotiate with terrorists. I use that word literally — the CAs and browser vendors use fear to achieve their goal: to get your money. The CAs collect a ransom every year to ”renew“ your certificate (i.e. to disarm the time bomb that they set the previous year) and if you don’t pay up, they’ll scare away your customers. ‘Be a shame if sometin’ like that wos to happens to yous…

Unfortunately, however, web browsers get really upset when they encounter self-signed certificates and throw up all sorts of ludicrously overblown warnings. Firefox, for example, gives the error below when first connecting to trivia over SSL. 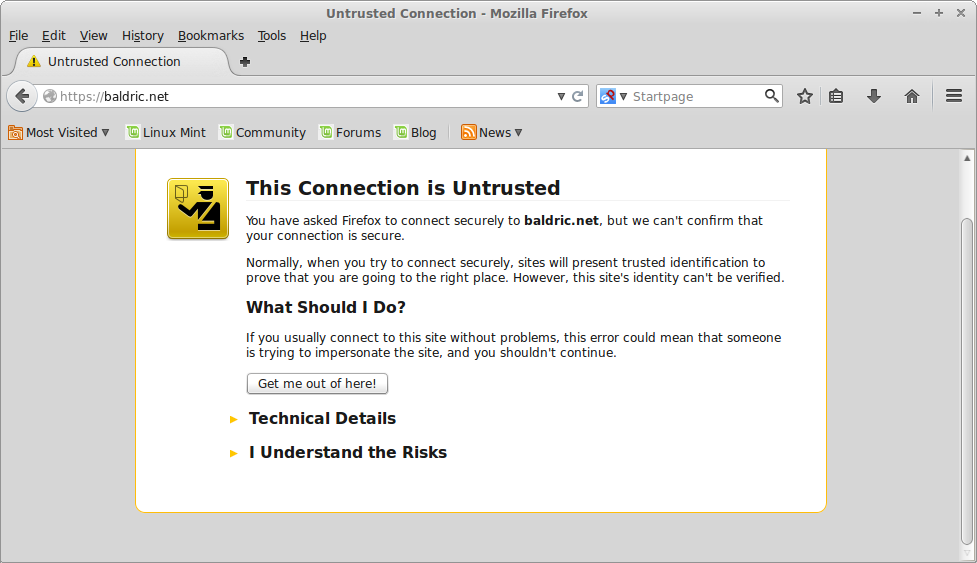 Any naive reader encountering that sort of error message is likely to press the “get me out of here” button and then bang goes my readership. But that is just daft. If you are happy to connect to my blog in clear, why should you be afraid to connect to it over an encrypted channel just because the browser says it can’t verify my identity? If I wanted to attack you, the reader, then I could just as easily do so over a plain http connection as over SSL. And in any event, I did not create my self signed certificate to provide identity verification, I created it to provide an encrypted channel to the blog. That encryption works, and, I would argue, it is better than the encryption provided by many commercially produced certificates because I have specifically chosen to use only the stronger cyphers available to me.

Encrypting the connection to trivia feels to me like the right thing to do. I personally always feel better about a web connection that is encrypted. Indeed, I use the “https everywhere” plugin as a matter of course. Given that I already have an SSL connection available to offer on trivia, and that I believe that everyone has the right to browse the web free from intrusive gratuitous snooping I think it is now way past time that I provided that protection to my readers. So, as of yesterday I have shifted the whole of trivia to an encrypted channel by default. Any connection to port 80 is now automatically redirected to the SSL protected connection on port 443.

Let’s see what happens to my readership.

Permanent link to this article: https://baldric.net/2015/06/01/encrypting-trivia/