I know I shouldn’t laugh

But in what looks to me very like a DNS snafu, Facebook, Whatsapp and Instagram all disappeared today for a huge swathe of users from around 16.20 UK time. Downdetector shows:

(I love that big red button in the middle of the page which says “I have a problem with Facebook”. Yes I do, and I always have.)

But even better is some of the breathless reporting around the net. I particularly like this one from the Greekreporter: 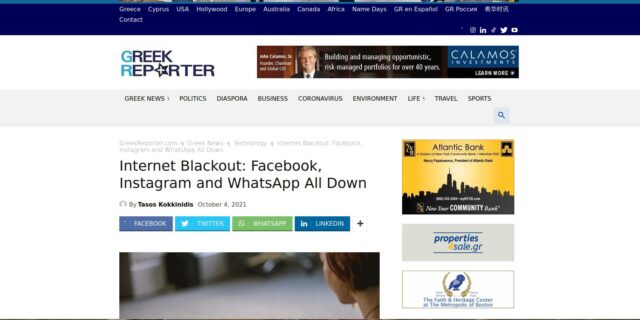 I think we can all live without Facebook for a while. But I’ll bet some poor sysadmin schmuck at the Zuck factory will lose his or her job over this.

Initially, knowing my antipathy to all things Facebook, my wife blamed me, assuming it was just local and that I had made some new change to my local network configuration. Not me darling.

(Addendum. Arstechnica reports that it may be a BGP route update failure. Interestingly, they also report that Facebook’s DNS is hosted on Amazon’s services. Oh dear.)

(Second addendum: 5/10/21. Cloudflare have a rather good explanation of what went wrong. They confirm a BGP error when “Facebook stopped announcing the routes to their DNS prefixes. That meant that, at least, Facebook’s DNS servers were unavailable.”