another update to correspondence with a corporation

Since my last post at the end of last year I have been testing my ST780 with a variety of alternative VOIP providers whilst at the same time trying to get BT to sort out my connection. I also lodged a formal complaint about the appalling level of technical support with the BT complaints department on 30 December.

The complaints department initially responded to me on 4 January with an acknowledgement and a comment that I could expect a fuller reply in 24 hours. On the 8th of January I received the following gem:

Thank you for your e-mail regarding the problems you are experiencing with your BT Broadband service. Please accept my apologies for the inconvenience this has caused you.

Unfortunately we are unable to assist with technical issues, we have however passed your email to our technical support team, who will be in contact with you in the next 3 to 4 working days to work towards a satisfactory resolution. Should you wish to contact the technical support desk please call 0845 600 7030.

I would again like to apologise for the problems you have experienced. I do hope this information will be of assistance to you.

Since that date I have heard nothing – though I have now received my shiny new hub (which I do not intend using).

Now since the substance of my complaint was that the technical support department was neither technical nor supportive I have decided that it is futile to continue down this road and I will simply escalate my complaint (on paper) to the Customer Relations Manager.

Meanwhile, just to prove that there is nothing wrong with my ST780 router, as I mentioned above, I have been experimenting with alternative VOIP providers and have now signed up with Sipgate. Sipgate offers free VOIP services within its own network and with peer networks such as FWD. It only charges for its gateway out to the PSTN. But its charges are very reasonable indeed. Sipgate also offers a rather neat opportunity to gain a UK geographic based telephone number for no additional charge. During my testing (for free) I could successfully dial in to my new Sipgate number from the PSTN and mobile networks but initially could not dial out to the Sipgate test number. Given the problems I have with BT I contacted Sipgate support who very generously credited my account with a small test sum so that I could check outbound connectivity to the PSTN. It worked fine so I have now signed up to Sipgate’s services.

Now compare this attitude and response from a company with whom I had no contractual relationship and had paid no money with that woeful response from BT to whom I pay a very considerable sum of money each month.

Permanent link to this article: https://baldric.net/2007/01/17/another-update-to-correspondence-with-a-corporation/

Recently you may have seen adverts in a wide variety of publications for a USB turntable. This product is aimed at people (like me) who have a collection of old vinyl recordings but no longer have the means to play them as they have moved to CD and/or digital recordings. Most of the turntables I have seen are priced at around £110. You don’t need to spend that much. And you certainly don’t need USB connectivity. Any turntable which includes its own pre-amp will do (but the pre-amp is necessary, it is no good buying a turntable without one). I bought one made by Bush for less than £50.00 – I’m sure a conversation with your local audio supplier will unearth others.

Once you have the turntable you can easily connect it to your existing HiFi and rediscover the joys of your old vinyl. But the best bit (and this is where the pre-amp comes into use) is that you can plug the turntable directly into the line-in jack on the sound card of your PC and record to disk for conversion to digital format (MP3 if you must, but OGG vorbis for preference). The key to this magic is a nice piece of open source software called Audacity. If, like me, you run Linux, then you can probably simply install the package supplied with your chosen distro, If your distro doesn’t provide it by default, then the website has pre-built packages for most of the popular distros. You can, of course, build from source if you wish. Audacity is cross platform and is available for Windows users. Windows users can then discover the power of free, open source software

Give it a try.

In my searches for more information about the BT Home Hub and its configuration I have come across a couple of good sites. The Home Hub Blog is an interesting collection of notes about the author’s attempts to unlock the Hub so that it can be used on other ISP’s networks. This is the reverse of my problem which is to get BT’s network to work properly with a product other than the Hub.

update to correspondence with a corporation

BT support finally called me back again today (two days late, but hey) and again attempted to transfer me immediately to the Broadband Talk support department. Before I allowed them to do so, however, I made certain that the person I was talking to fully understood my problem. I believe she did. But she confirmed that there was absolutely nothing that she or anyone else in the broadband support department could do to help me – the problem lay with another department. Despite my protestation that we had been around this particular tree before I allowed myself to be transferred.

As before, the guy I was transferred to at Broadband Talk support had no idea what my problem was and I had to explain yet again, why I was attempting to get support. (As an aside, I find this lack of joined up support apalling. The recipient of the support call should have the full details of the caller’s problem on-screen when he or she takes the call – particularly in cases such as this where the support organisation has actually placed the call). As soon as he realised I was not using a Home Hub, the problem became clear to him. My router is at fault.

Actually, no, my router is fine. It works perfectly for all other services and actually works fine for VOIP services on FWD. But no, BT is correct, I am wrong. To be fair to this particular support person, he offered to provide me with a replacement Hub (an offer I eventually accepted, if only so that I can check its configuration in detail to compare against my ST780).

Maybe I’m overly paranoid, but I get the distinct impression that BT has decided to lock its services to the Hub rather than allow people to use alternative products on its network. I actually prefer to have something that I control, rather than something that BT control. When my new Hub arrrives I’ll dump its configuration and try to figure out how BT are locking out my ST.

Permanent link to this article: https://baldric.net/2006/12/31/update-to-correspondence-with-a-corporation/

I have just found a rather nice tool for querying my Thomson DSL modem. It is rewrite of a tool originally written for windows by A. Matthoefer. The author of the linux version is Timo Boettcher. The tool compiled cleanly and worked first time with my ST780WL. It should work equally well with the BT hub (but I can’t test that of course….). Below is a sample output from the tool – a neat graphic. 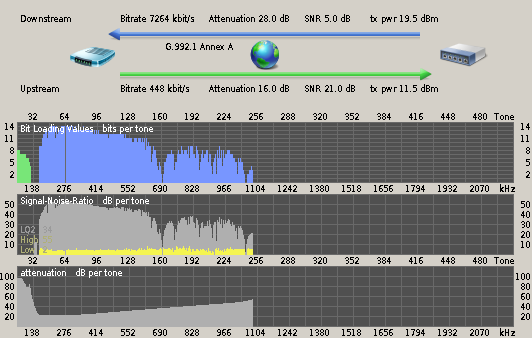 correspondence with a corporation

Recently I have been experiencing a small problem with my BT broadband connection. I should point out that in general my experience wth BT’s broadband offering is very good. Whilst not the cheapest around, the quality and reliability of the connection are better than I have heard reported from friends and colleagues with other ISPs. But for the past two weeks I have been having great difficulty in getting the support department to fix (or even recognise) a problem I am having with my VOIP connection.

I upgraded to BT Total Broadband (up to 8Mbps) from my previous 2Mbps BT contract for two reasons – firstly the additional bandwidth obviously, but secondly because it offered free VOIP calls after 18.00 and at weekends. Thus I would be getting a second phone line for no additional cost. Indeed, given that the contract I changed to was actually cheaper than my existing BT contract, I was initially quite pleased.

The BT Total Broadband contract includes a DSL router made for BT by Thomson) and branded by BT as the “Home hub”. That hub offers VOIP connectivity and WiFi access as well as wired ethernet connectivity to the net. Despite the fact that BT have heavily customised the standard Thomson Speedtouch interface, it is still an attractive package. However, I am not the standard user that BT intends to support. For a start I use Linux, not Windows. This normally gives support departments problems.

Having signed up, taken delivery and configured my Hub all was well until I opted to include what BT calls its “softphone” package as well. This is a software only SIP package which is supposed to allow PC users to make VOIP calls from the PC in addition to using a standard phone (or DECT phone) attached to the hub. This can be useful for laptop users for example who may be using their machines in rooms without immediate access to the telephone handset. Obviously, being a Linux user, the BT softphone is useless to me, so I downloaded some potential alternatives – linphone, wengophone and x-lite to try. Unfortunately for me, my Hub threw a fit when I fired up the softphones. Indeed, after attempting to use linphone, the router rebooted, and rebooted, and rebooted, and rebooted. Eventually I tried a hardware reset to get back to factory settings, but even that failed and the hub now just broadcasts BOOTP requests over the ethernet connection.

Having fritzed my hub I went back to using my D-Link router until I could source a replacement. I soon took delivery of a Thomson Speedtouch ST780WL (big brother to the hub). I configured this in the same way as the hub in the expectation that all would be well. My mistake. Whilst, indeed, all is well with my standard internet connectivity, I cannot get the VOIP service to work. In desperation (trust me) I contacted BT Broadband support. That started a thread of correspondence which has lasted so far for two weeks and has descended to the level of farce. No-one , but no-one in BT support seems capable of reading and understanding my request. My experience is shown at Problems with BT Broadband I have anonymised the relevant contact details for obvious reasons.

Permanent link to this article: https://baldric.net/2006/12/29/correspondence-with-a-corporation/

I admire the offbeat, the unusual, and the plain weird. I came across Mike Harrison’s site when I was looking for information about Tesla Coils. It is well worth a visit – I mean the man collects thermionic valves such as this: 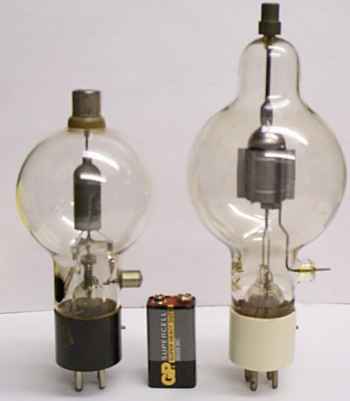 A bit bigger than a transistor

I am not a great fan of blogs. Before blogging became popular, people who wrote diaries used to do it in private and wash their hands afterwards (to misquote Heinlein). But occasionally I have found a blog which has been useful to me. Typically such blogs have been single topic or specialist sites devoted to descriptions of how the author has solved a particular problem.

I’m actually impressed with myself that this blog is still going nearly three years after this post. Hell, I need to get a life.

(And another addition dated 23 December 2013 when I was reflecting on the year ending. So – seven years after starting, I’m still going. And I haven’t run out of things to say. Astonishing.)